You are here: Home / God / Getting Past Your Past 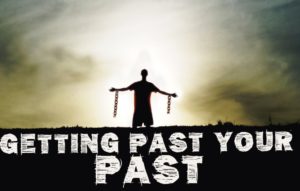 I’m reminded of a commercial that shows individuals walking around with a paper-faced mask mounted on a stick and as they greet others, they hold the mask up to hide their real self. Often, because of our leadership roles, we are like that commercial. We greet others, shake their hands and make nice, but at times it is just be a facade of our true selves; how we feel; what we are going through or dealing with at the time.

As much as we like to make others think our lives are neat and tidy, we find ourselves at times struggling and trying to keep it all together. We are not all together on the inside as we are projecting on the outside.

The struggles can be anything like a marriage gone astray, feeling like a failure in your leadership role, issues with depression or an issue in your past that you keep hidden with the fear that at any time it may come out.  However, whatever is haunting to you that can’t get you past your past can be solved. There is an encounter that Jesus had with Peter that has served as a great encouragement to me when dealing with failure in myself or in others.  This can be found in John 21.

What needs to be understood in this story is to comprehend what Peter is going through inside his own mind and through his own actions. Remember, he had denied Jesus three times. That moment of realization of what he actually had done was now burned into his psyche. Each time he thought of Jesus, his mind would go directly to that crushing moment of betrayal. In his mind he can still hear the rooster crowing as his eyes were locked on his Savior.  The Scriptures tell us that Peter went out and wept bitterly. Yet, none of that weeping could ever soothe the pain or wash away the image of realization of what he had done to the one he loved.

I can imagine the all-consuming failure that Peter must have felt. Peter, the rock, was devastated and crush, for he believed he would always carry around this black mark against Christ on his name.

After the crucifixion of Christ, we find Peter, John and some of the other disciples in Galilee taking time to fish and contemplate and reflect over all that had recently transpired. They fished all night and did not catch a thing. As they were ready to throw in the towel, they have an encounter with a stranger on the shore. As the conversation flows, John comes to the realization of who this stranger is, and say, “It’s the Lord”.

At this point, you have to love Peter because he is much like many of us in that he can be spontaneous, emotional, and reactionary. What Peter does, proves this point as he jumps into the water and starts swimming to shore.

After his spontaneous reaction and frantic swim to the shore, Peter is standing before Jesus dripping wet and not at all any better than before. Remember, he had failed Jesus miserably in his mind and I am sure he was wondering if the relationship with Jesus could ever be repaired.

The other disciples arrive, and they enjoy breakfast on the beach with Jesus. Once the meal is over Jesus turns and addresses Peter. The Scriptures do not tell us what is going on in Peter’s mind, but I bet he has all kinds of emotions racing through his mind as his heart is racing and his stomach is churning waiting for the Words of Jesus directed to him alone.

There are three simple truths that have had an impact in my life and helped me when I have felt like a failure.

First, Jesus seeks after me. I want you to see the proof in Scripture. In this particular account, we see that Jesus comes and finds Peter and the other disciples. I believe you can be confident of this wonderful spiritual truth. Jesus pursues after us.  It does not matter what we may have done or what is in our past, The Lord and Savior of the universe comes looking for us!

This fact can be seen throughout the Scriptures.

o   First, we find God in the garden looking for Adam and Eve

o   After 40 years in the desert, God takes the initiative to meet Moses in a burning bush.

o   Jonah, who ran from God’s call to go to Nineveh, had God run after him.

o   Now Peter, after he had denied Christ had gone back to his old career of fishing.  Jesus comes and finds him in spite of his failure.

And third, Jesus reminds us that our work is not done. Jesus says to Peter 3 times “feed my lambs…take care of my sheep”. The most important and precious thing to Jesus are people. He knew he would be ascending back into heaven, but the work of building His kingdom was far from over. So Jesus tells Peter that He wants him to take care of what matters most to him – people. Jesus places the most valuable possessions into the hands of Peter to take care of.

The issue in this moment was not forgiveness but restoration.  Peter moves from resigned to re-instated.  Peter is on the sidelines and Jesus taps him on the shoulder and says “I want you to get back in the game.  I’m not through with you.” It is interesting to me that the assignment he repeated to Peter 3 times was “take care of my sheep”.  It wasn’t to build a great church or launch a world-wide ministry.  It was to care for people.

No matter what failure you are currently dealing with, what the devils means to destroy you with, God in His wonderful grace, takes such and molds it into a tool that you can use to build His kingdom. This experience for Peter was life-changing. We can see what happens with Peter when we get to Acts chapter 2. Peter stands before a crowd and with Holy ghost boldness preaches the truth of Christ and 3,000 new converts are added to the church that day.

God was not finished with Peter. His denial and cursing of Christ did not end his ministry, rather it launched it to new heights and dimensions.  This should let you know that no matter what is or has gone on in your life, Jesus is not done with you yet either!