You are here: Home / Leadership / The Power of a Testimony

We live in a pluralistic society where there is a continuous battle that wages even within Christianity regarding what doctrine is true and who’s interpretation of Scripture is correct. While working on my Doctorate at Howard University’s School of Divinity, I clearly remember the discussions and viewpoints brought forth by my peers that in some cases where contrary to my own understanding and comprehension of Scripture. We could debate and argue all day yet at the conclusion of our class, many times I would leave still in disagreement with what was presented as I saw it to be contradictory to my own knowledge and understanding of Scripture.

We may argue about doctrine and stand resolute on what ‘Thus saith God,” regardless of what others say, never budging an inch. We can discuss and defend our interpretation of Scripture until we are blue in the face, finding that we are still unable to sway or convince others as to what we believe is correct. However, there is one powerful tool that God has given to each of us that does not require years of Biblical study nor an academic degree in Religion to profess the truth of God’s Holy Word and that is our testimony.

We can clearly see in Scripture how Jesus and His disciples used miracle testimonies to confirm that the words they spoke were true. Concretely, it is through the Word of God and the Holy Spirit that brings forth the transformation in our lives and makes us new creatures in Christ. However, the writers of the Bible demonstrate that the use of personal testimonies reaffirm the promises, blessings, and Word of God as hearers and seekers easily relate to stories and often cannot deny the truth of the testimony that stands before them.

I have more miraculous testimonies of God’s love, provisions, healings, and graciousness in my own life than there is time to write about here. In my role as a pastor and District Superintendent for the Assemblies of the Lord Jesus Christ, I have witnessed the miraculous work of Christ in the lives of many others with awe and gratitude and celebrate the truths that are written in the Word of God and celebrate who my Savior is.

Over the past week I have been inundated with emails, texts, and IM’s regarding the claims surrounding the testimony of a powerful man of God, Rev. Lee Stoneking. My name has been drawn into the center of a debate that does not question whether or not such an awesome testimony given by this man of God at the United Nations is true, but rather to the various claims surrounding his testimony. I am taking the time to address this issue for two purposes: First, to prayerfully end the bombardment of requests regarding affirmations and questions of my speech and the purpose of my own appearance at the United Nations and second, to bring forth a teaching moment to each of us. 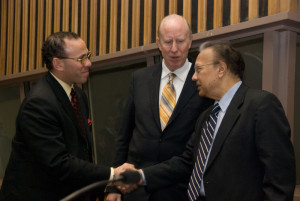 I was invited to speak at a special convening at the United Nations in 2008. This meeting was held to address, reaffirm, and celebrate the 60th anniversary of the passing of the Universal Declaration of Human Rights presented by the then First Lady, Eleanor Roosevelt (http://www.un.org/en/documents/udhr/). I was introduced to and by Ambassador Anwarul K. Chowdhury, the then, Under Secretary General and High Representative of the United Nations. I did not speak before the General Assembly of the UN or in the General Assembly Room. As a point of clarification, the General Assembly Sessions are typically held annually during the month of September and as publicly advertised, the 2015 Session of the UN General Assembly begins on September 15th and is scheduled to run through the 22nd. (http://sd.iisd.org/events/70th-session-of-the-un-general-assembly-unga-70/ ) My own very limited understanding of meeting operations and locations within the UN is that there can be specially called ‘high-level’ meetings with a specific purpose and held in the General Assembly Room as was the case for Rev. Stoneking.

My own experience regarding my presentation at the UN has me first reflecting upon the honor I had in representing the apostolic movement and the opportunity to speak in an assembly within the UN that was full of leaders and dignitaries who were meeting to address Human Rights for all of mankind. My speech held to reaffirming this declaration and addressed the 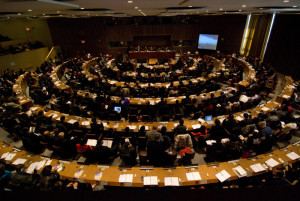 MDG’s (Millennium Development Goals) set by the UN. In my summation, affirming my faith as an apostolic minister, I told this audience that all the programs and projects that were underway and new ones being formulated within this building  would never be met until the leadership of the UN made God the foundation and placed Him in the center of all they planned and did. I concluded my message with II Chronicles 7:14, “If my people, which are called by my name, shall humble themselves, and pray, and seek my face, and turn from their wicked ways; then will I hear from heaven, and will forgive their sin, and will heal their land”. I will never forget at the end of the meeting, a dignitary walked up to me, stretched forth his hand and took his finger and jabbed it hard against my chest and said, “I want what you have!” I was able to share with this individual my personal testimony and what God had in store for him. This is my God-given testimony that I am humbled to share in brief to you here and one I have expounded upon with many around the world.

So, this is MY testimony that God gave me regarding this specific event, just as the Rev. Stoneking has his own testimony from his experience at the UN. This leads me to my second point, the teachable moment. God does not need our help! When we stick our nose in His business, we will ALWAYS mess it up! It is great when a door is opened to a significant opportunity and experience. Rev. Stoneking’s testimony is powerful and truly demonstrates how great Jesus is. In our own enthusiasm and excitement, we must be very careful to not embellish the significance of the testimony. When I recently reviewed the UN video of Rev. Stoneking, I noticed that he had more than 2.9 million views!!! That in and of itself is another powerful testimony and to God be the glory. This just lets me know that we have a people who are hungry and seeking the miraculous and has me frustrated with what such distractions are doing, turning people away from the redemptive message of Jesus Christ.

I first paid little attention to the calls regarding the following statement, “This morning Rev. Lee Stoneking was the first apostolic in history to address the United Nations General Assembly in NYC,” until this enthusiastically promoted title was being aggressively challenged. As the banter has been heating up, tweets being blocked, and as others are fact checking and in turn through such research generating even more questions to the credibility surrounding the testimony are still being brought forth, I began to think about the un-churched. Could all of this hoopla redirect from what God wants to do through this powerful testimony and turn many away from Him?  Purposeful or the unwittingly careless or exaggerated statements can turn many away from the testimony and have them focus upon the lack of credibility surrounding the testimony. As a result, will the un-churched think the testimony itself as untrue? When we celebrate the power of the testimony, our words must be unimpeachable. God does not need our help, we need to let go and let God  – for it is His Spirit in the testimony that does all the work! It does not matter ‘who’ spoke ‘first’ at the UN. What matters is that we do not allow our excitement, naivety, or our own personal agenda’s to interfere with God’s purpose and tarnish the testimony. Truth remains true and will always stand on its own. We are called to build HIS Kingdom, not our own – therefore, let us focus on the fact that Rev. Lee Stoneking was raised from the dead!! He is our modern day Lazarus and having personally seen what my God can do, I just know Stoneking is not and will not be the only one. It is Rev. Stoneking’s testimony that increases my faith and tells me that my God can do so much more, so I’m going to make sure I stay out of the way and let God do His thing!